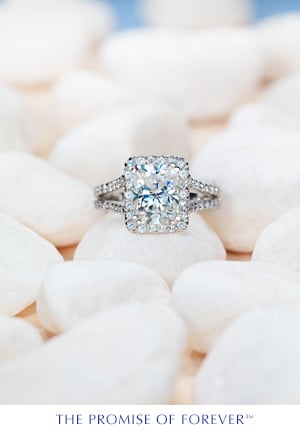 Moissanite is a unique jewel with more fire, brilliance, and sparkling lustre than any other jewel or gemstone including a diamond. All Majestic Moissanite™ and Charles & Colvard moissanite is sold with a Limited Lifetime Warranty giving you the assurance that its sparkling fire and brilliance will never fade.

It will be every bit as beautiful, fiery and brilliant for generations from the day you make your purchase.

Moissanite is a rare, naturally occurring mineral also known as silicon carbide, which was first discovered by the Nobel Prize Winning chemist Dr. Henri Moissan at the site of a massive meteorite strike in Arizona. This intriguing new stone was named moissanite in his honour.

It wasn’t until the late 1990’s that scientists – working in a research laboratory located in Research Triangle Park, North Carolina – developed the innovative thermal growing process that creates silicon carbide crystals. These crystals are fashioned into moissanite gemstones that rival any earthly gemstone for fire and brilliance. These gems are more durable than diamond, sapphire, ruby or emerald.

Moissanite is grown in a laboratory where thermal and other complex time-consuming scientific processes are used to produce SiC (silicon carbide) crystals. Only the very best crystals are selected to produce the best quality Majestic Moissanite™ and Charles & Colvard® moissanite gemstones.

Each Moissanite crystal is cut and polished by hand into a beautiful sparkling gemstone with unrivalled fire and brilliance. It is also known as silicon carbide which is one of the hardest and toughest known elements on earth, making it extremely resistant to scratching, chipping or breaking.

Moissanite isn’t a diamond simulant or a synthetic diamond – it is an affordable alternative and a jewel in its own right.

However, inevitably, comparisons are always made since moissanite looks like and tests as a diamond using a standard diamond tester.